Menu
Home »Automobile»2022 Maruti Suzuki Brezza Base LXI variant in a detailed walkaround video
Maruti recently launched the 2022 version of Maruti Brezza in the market recently. Like most of the Maruti cars, Brezza also received great response from the customer. Price for the 2022 Brezza starts at Rs 7.99 lakh, ex-showroom and the cars have started reaching the dealership as well. A detailed first drive review about the new Maruti Brezza SUV is available on our website and YouTube channel already. It is different from the older version in many ways and even the base variant now comes with more features than before. Here we have a detailed walkaround video of 2022 Maruti Brezza’s base LXI variant.

The video has been uploaded by Power Racer on their YouTube channel. In this video, vlogger shows a base variant Maruti Brezza and talks about the features in it. Starting with the front, the car gets single projector headlamps with halogen lamps in it There are no LED DRLs and the turn indicators are halogen units integrated in the headlamp cluster. The front grille design remains the same and it gets chrome accents as well. As this is the lower variant, the SUV does not get silver coloured faux skid plate and LED fog lamps. In fact it does not get any fog lamp at all.

Coming to the side profile, the car design remains the same. There are turn indicators integrated into the ORVMs and the pillars are all blacked out. The wheels are blacked out steel rims and they do not come with wheel caps too. The SUV gets a spoiler at the rear and the tail lamps are split LED units from the base variant itself. The Brezza moniker can be seen on the tail gate and the mild hybrid systems badge is also seen here. The rear bumper does not get the Silver skid plate. Vlogger mentions that Maruti is now offering safety features like ESC, airbags, traction control, reverse parking sensors as standard. 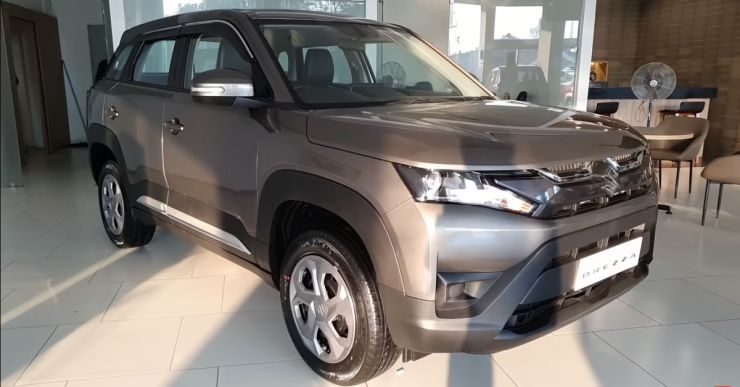 As we move in, Brezza’s layered dashboard design is seen. The cabin gets an all-black theme in the LXI variant. The higher variants get dual-tone cabin. the steering is tilt adjustable. LXI variant does not get any infotainment system or speakers. There are no steering mounted controls as well. The fabric pads on the door are not present in the base variant. It gets textured plastic on this portion. The instrument cluster in also different from the higher models. It gets an analog instrument cluster with a black and white MID in the centre.

The seats are wrapped in fabric material and the AC in the base model in a manual unit There are multiple storage spaces on the centre console but it does not get an armrest. There is an AC vent at the rear as well. The rear passenger gets bench seats with no headrest at all. This is a feature we feel Maruti should have offered from base variant. The parcel tray is also missing in the boot. Maruti Brezza is available with a petrol engine only. It is a 1.5 litre naturally aspirated engine that is offered with a 5-speed manual gearbox in the base variant. higher variants get the option of a 6-speed automatic transmission as well.