Royal Enfield’s new Scram 411 takes on the Yezdi Scrambler in a battle of hits and misses. We find out which one scores better.

It’s funny how for years the only true Scramblers we’ve had in India have been expensive, big bikes, but now, in a span of three months, there are two legit new options available – the Yezdi Scrambler and the Royal Enfield Scram – and we’ve got them going head to head.

Perhaps a good way to begin this is by answering the question, what is a scrambler in the first place? You’ll find plenty of interesting, historical explanations on the Internet, but the short, simplistic description is that these are street motorcycles that also have some credible level of off-road capability.

These bikes tend to have clean, minimal designs that echo both their on-road and off-road intentions. And that’s why you’ll see that both keep it simple, without any big windscreens or substantial bodywork.

One thing that should be pointed out is that the Scram is heavily based on the Royal Enfield Himalayan, but Yezdi has gone to great lengths to differentiate the Scrambler from its siblings, the Roadster and Adventure, and kudos to them for doing so. 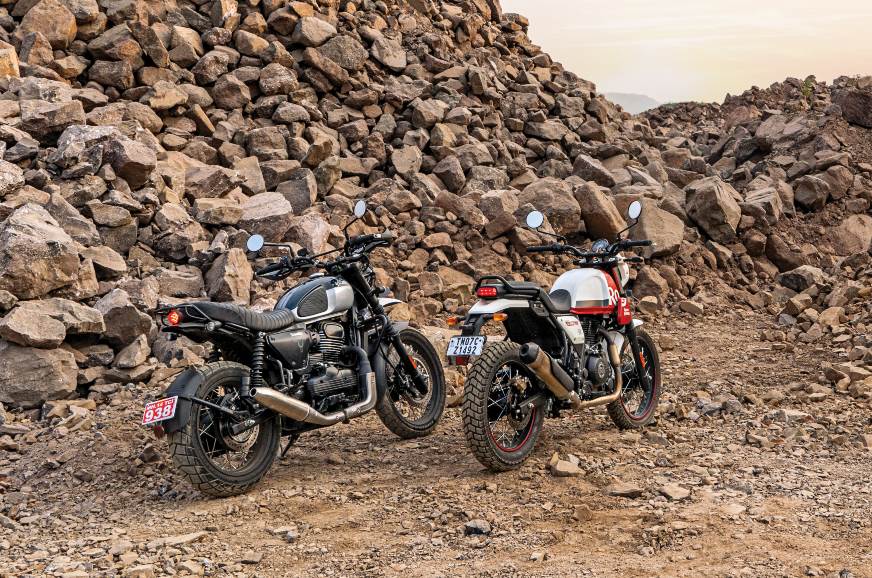 The Himalayan has always been a slightly oddball, quirky looking motorcycle, and while the Scram does look a little more proportionate, the overall shape is very familiar; although, its lower headlamp does make it look a little more proportionate. In comparison, the Yezdi cuts a much more traditionally attractive design, and while I still can’t decide if I’m okay with the angle of the rear seat, to most eyes, this is the more handsome motorcycle. However, things change when you take a closer look.

The Royal Enfield Scram isn’t as nice as the new Classic and Meteor 350, but the overall finish is quite clean, with good quality fasteners used all over. The only thing that caught our attention on the Scram was the patchy finish on the back of the exhaust. It’s not an area that most will ever notice, but if you do look there, it’s not a pretty sight.

Unfortunately, the Yezdi leaves a lot to be desired in terms of quality and finish. While the overall attention to detail could be much nicer, our bike came to us with less than 1,000km on the clock and it already had corrosion in places, including within the exhaust pipe exits and on one section of the chassis where the black paint had come off and rust was already starting to form. The screw for the clutch lever assembly would also repeatedly come loose on our bike, because the nut at the bottom fell off at some point. 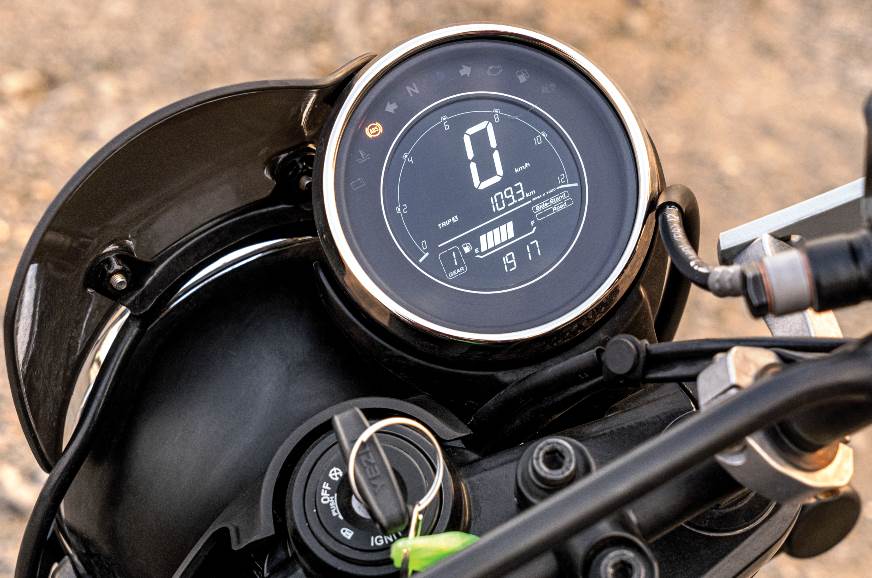 Making up some ground for the Yezdi is the fact that it has more features than the Enfield. Perhaps the most valuable one is that the Yezdi allows you to switch off the ABS at the rear or put it into a more sensitive rain mode, whereas with the Enfield you simply have a non-switchable dual-channel system.

The Yezdi also comes with very conveniently placed USB Type-A and Type-C charging ports, which is a helpful touch. Potential customers will also be excited by the fact that the Yezdi has an LED headlamp, but we found the halogen unit on the Enfield was actually much nicer at night. They both get smart-looking off-set instrument consoles with gear position indicators and basic trip data, but the Yezdi’s is quite hard to read in direct sunlight. 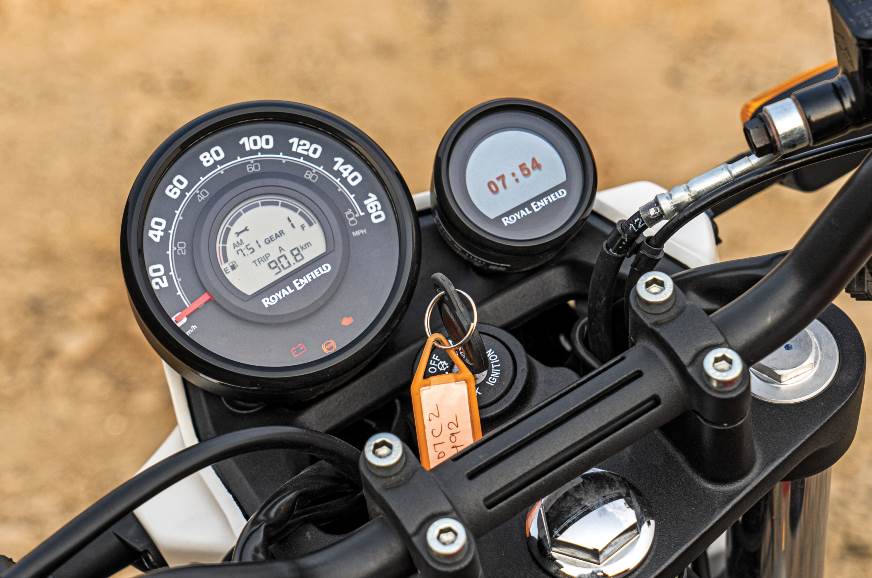 The bikes you see here have some accessories on them. In the Scram’s case, the Tripper navigation display on the side of the main console needs to be specified as an option when buying the bike. With the Yezdi, the headlamp grille, small flyscreen, engine guards and handguards are all accessories, and here too, the quality needs to improve, especially in the handguards.

Where the Yezdi firmly takes the lead is in engine specifications. It has the more modern powertrain with a four-valve head, liquid cooling and a 6-speed gearbox, whereas the Scram keeps things simple with the Himalayan’s well-known air and oil cooled engine and a 5-speed transmission. The Yezdi makes 5 horsepower more and that advantage on paper also translates to reality.

The Yezdi is noticeably quicker in every measurable way, be it 0-60, 0-100 and even in roll-on acceleration. Unfortunately, the motor has its share of compromises. When we first rode the Scrambler a month back, it was for a short duration and mostly at high speeds. Having now ridden it in the city, its low-speed fuelling feels inconsistent, which makes it hard to ride smoothly in bumper-to-bumper traffic. We also found that it doesn’t like early morning cold starts, and the engine cuts out repeatedly until it’s warmed up.

As we previously reported, engine refinement needs to improve as well because it sounds and feels rough when you rev it out, which is what you need to do if you want to access the performance. The Royal Enfield Scram is a very different experience. There is no escaping the fact that this bike leaves you wishing for more performance, but it makes up for that to some extent with very good refinement. The Enfield’s easily accessible torque and smooth fuelling also make it much easier and nicer to ride when you aren’t going flat out.

You are almost always in a higher gear on the Scram than you would be on the Yezdi, and that, along with the lower power figure, helps it to consume less fuel as well. In fact, the Yezdi returned surprisingly low numbers when we tested both bikes back-to-back.

On the highway, both bikes can hold a steady 100kph without effort, but again, the Enfield feels smoother, while the Yezdi has more performance in reserve. In the city, both bikes have moderately heavy clutch levers and both produce some noticeable heat, but neither gets overwhelming.

Suspension comfort is going to be an important factor in this segment and the Yezdi doesn’t do well here. As we reported earlier, the suspension is quite firm, almost to the point of being harsh, and this will put off some buyers. Reducing the preload on the Yezdi’s dual shocks helps quite a bit, but it’s still not as good as the Enfield. While the Scram also feels slightly firm at the rear, it is almost plush in comparison, and has the more comfortable seat as well.

As for handling, the firmer Yezdi is more responsive and engaging in the corners, but eventually both bikes do start to develop a mild weave and wallow if you push them close to the limit. The Yezdi also does a better job with braking and the Scram’s brakes are disappointingly dull, needing a lot of effort for quick stops.

When it comes to off-road riding, things get interesting between these two, but let’s talk about weight first. The Scram weighs about 194.5kg with the optional main stand installed, and about 193kg without it. If you were to look at the Yezdi website, the company lists ‘weight’ as 182kg, which sounds pretty good. Unfortunately, for some reason Classic Legends has chosen not to be entirely transparent here, because they don’t state that the figure is without fuel. Once you account for the 12-litre fuel tank, the Scrambler weighs pretty much the same as the Scram.

And that means that both these bikes are heavier than we’d like. Thankfully, both have a good 200mm of ground clearance, but as has become the theme of this story, both have their advantages and drawbacks. 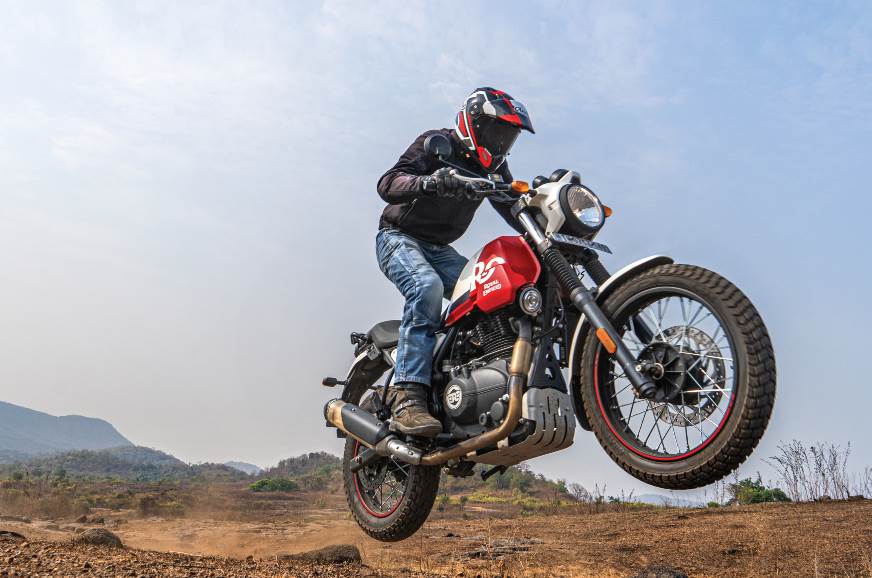 The Scram’s suspension is better here as well. It not only has more travel (190mm front and 180mm rear) than the Yezdi (150mm front and 130mm rear), but it’s also better damped and more absorptive. The Scram’s generous torque and smooth throttle makes it easier to manage tight manoeuvres at slow speeds, and the bike definitely feels more comfortable and encouraging to ride in the dirt. The downsides are that it just doesn’t have the grunt you’d sometimes want, and that it’s impossible to turn off the rear ABS without pulling out a fuse and turning the whole system off. Both those things make the Scram more suited to calmly explore some off-road surroundings, rather than riding it fast and aggressively. 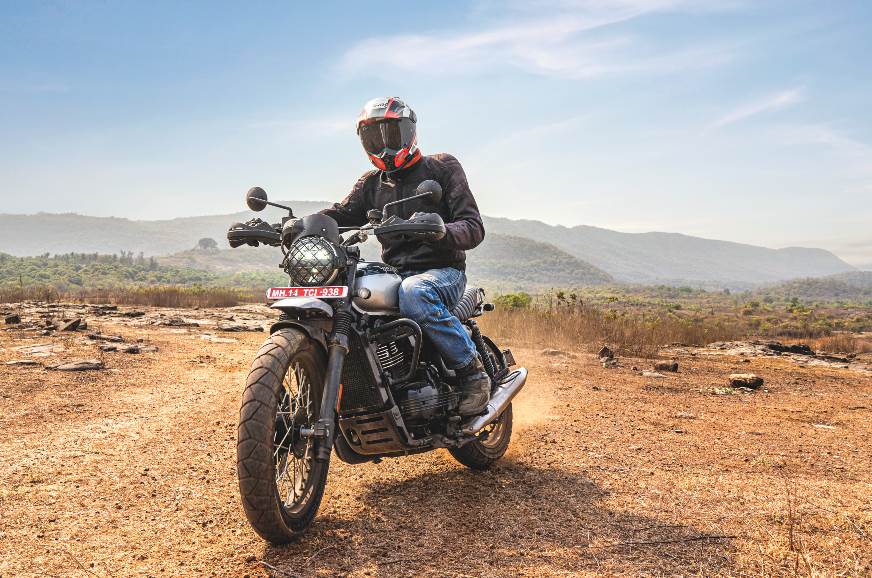 On the other hand, the Yezdi’s extra hit of performance and its switchable rear ABS make it more of a fun hooligan – but it doesn’t have the RE’s ease, composure and confidence. Moreover, the relatively limited rear suspension travel means it bottoms out more easily, especially if you have reduced the pre-load for more road comfort.

Despite having the same claimed ground clearance, the Yezdi also tended to scrape more often. While tall riders will find the Yezdi’s standing ergonomics a bit cramped, short riders will appreciate that neither bike has a very high seat.

Ultimately, these two have a pretty decent amount of off-road ability, but if that is a high priority for you, then the Adventure siblings of both these bikes will prove to be more capable and better equipped for not a lot more money.

After hundreds of kilometres and days of riding, it is evident that both bikes have some nice things to offer, but I can’t shake the feeling that both also come across as a little underwhelming.

Prices will play no role in deciding between the two because both bikes cost almost exactly the same, so let’s begin the conclusion by addressing the newer bike here.

The Scram 411 shows just how much Royal Enfield has improved the performance, quality and refinement of the original Himalayan over the past six years. At the same time, it also highlights that the company has taken this platform as far as it can go, and the bike now deserves more performance, better brakes, less weight and fresh style. Happily, a brand-new next-generation Himalayan has just been spotted testing and it promises all of that!

As for the Yezdi, it’s a good-looking motorcycle, has nice features and is quite quick. Unfortunately, the bike comes across as a little crude and unrefined, both in the way it’s put together and also in how the engine performs. There is a lot of potential here, but also a lot of scope for improvement, and that’s why the Scram 411 is our pick of the two.