On-road, Off-road, No road. Here’s what happened when 30 accomplished women took to the wheel of XUV700s and Thar’s as part of the action-packed Women With Drive from Mumbai to Igatpuri. Veejay Nakra, President of the Automotive Division and Member of the Executive Board, M & M, along with Chief Design Officer Pratap Bose at the flag-off at Sofitel Hotel in Mumbai. A quick briefing by the Autocar crew before the women hit the road. 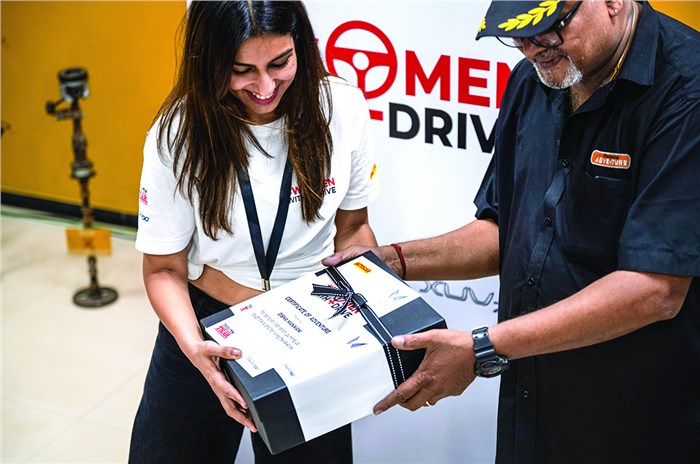 Commendations and goodies for the participants.

Honey Setia was adamant that she wouldn’t move the Mahindra Thar she was piloting another inch. Setia loves driving and is the designated driver in her family, but, right at this moment, with the Mahindra Thar perched on a steep descent, she was not so sure of herself. “I simply froze. I was sure I would make a hash of things, but the Mahindra Off-Road Academy Training crew and the folks at Autocar kept encouraging me to have a go. I’m glad I paid heed to their advice – it was such a lot of fun!” said Setia. Setia, a travel professional, was not the only woman who had a ball of a time at the Women With Drive 2022, which was jointly organised by Mahindra & Mahindra and Autocar India last month. 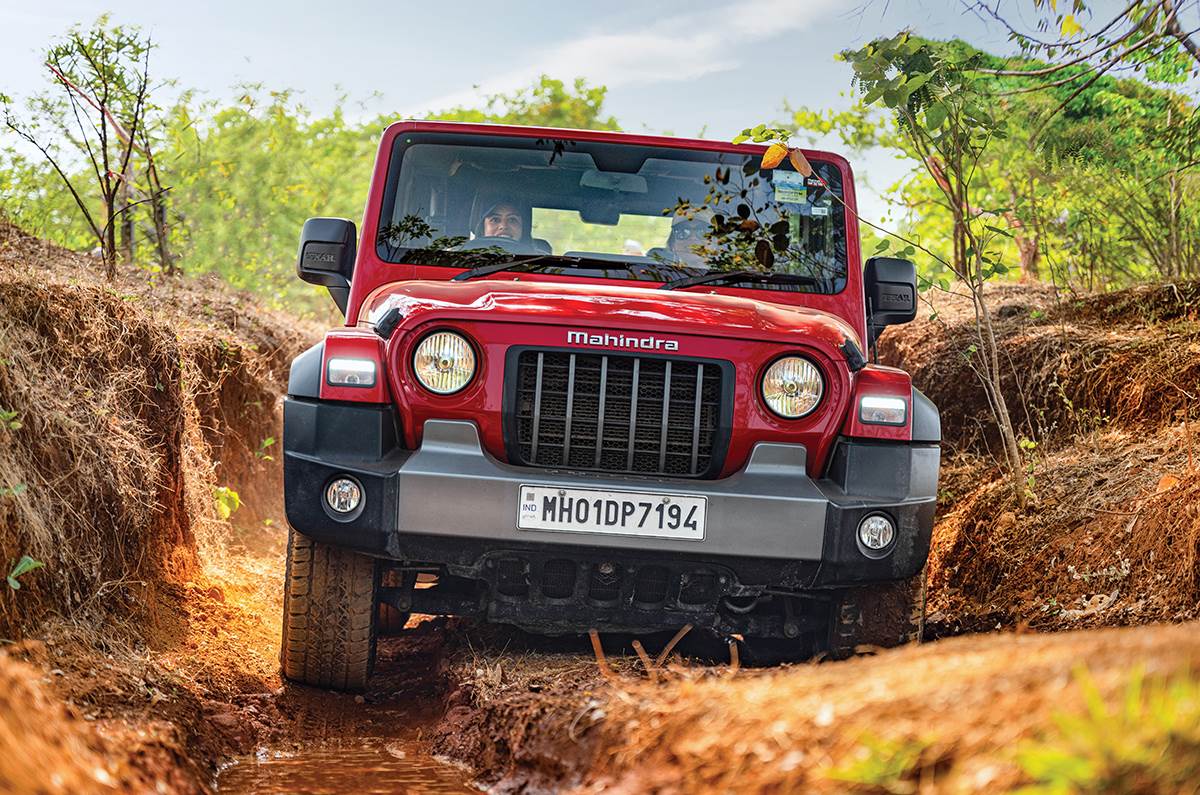 From lawyers and doctors, to entrepreneurs and clinical psychologists, 30 accomplished women signed up for the event that saw them drive from Mumbai to Igatpuri in Mahindra XUV700s and Thars, and then plunge straight into action at the Mahindra Off-Roading Academy. The idea behind Women with Drive is simple. Its prime goal is to build a community of women driving enthusiasts who are as comfortable behind the wheel as they are helming companies or teams, and dispel the antiquated notion that driving is a man’s thing. And no one could have encapsulated the philosophy behind the event better than the forthright Veejay Nakra. “Until not too long ago, Mahindra products were supposed to be for macho men – that is no longer the case. Each new product of ours is shaped by diverse inputs, including from women, and, as you can all see, these inputs have only made our SUVs better,” said Nakra, President of the Automotive Division and Member of the Executive Board at Mahindra & Mahindra. Nakra and Mahindra & Mahindra Chief Design Officer and Executive Vice-President Pratap Bose flagged off the drive.

The NH3 that leads towards Igatpuri is a smooth, gently winding stretch of tarmac and offers a pleasant drive, if conditions – by that, we mean traffic – are favourable. And since traffic was sparse on that sunny Saturday, the convoy, which consisted mostly of the Mahindra XUV700s along with a few Thars, eased out of the city and hit the open road. The atmosphere in the cars, connected via walkie-talkies, was akin to a fun outing of friends bound together by a passion for driving and a curiosity about how cars and SUVs behave when the road ends. The walkie-talkies in each car crackled with excitement, and a quiz on Mahindra cars elicited a tremendous response. (Q: Which French two-wheeler company is owned by Mahindra & Mahindra?) 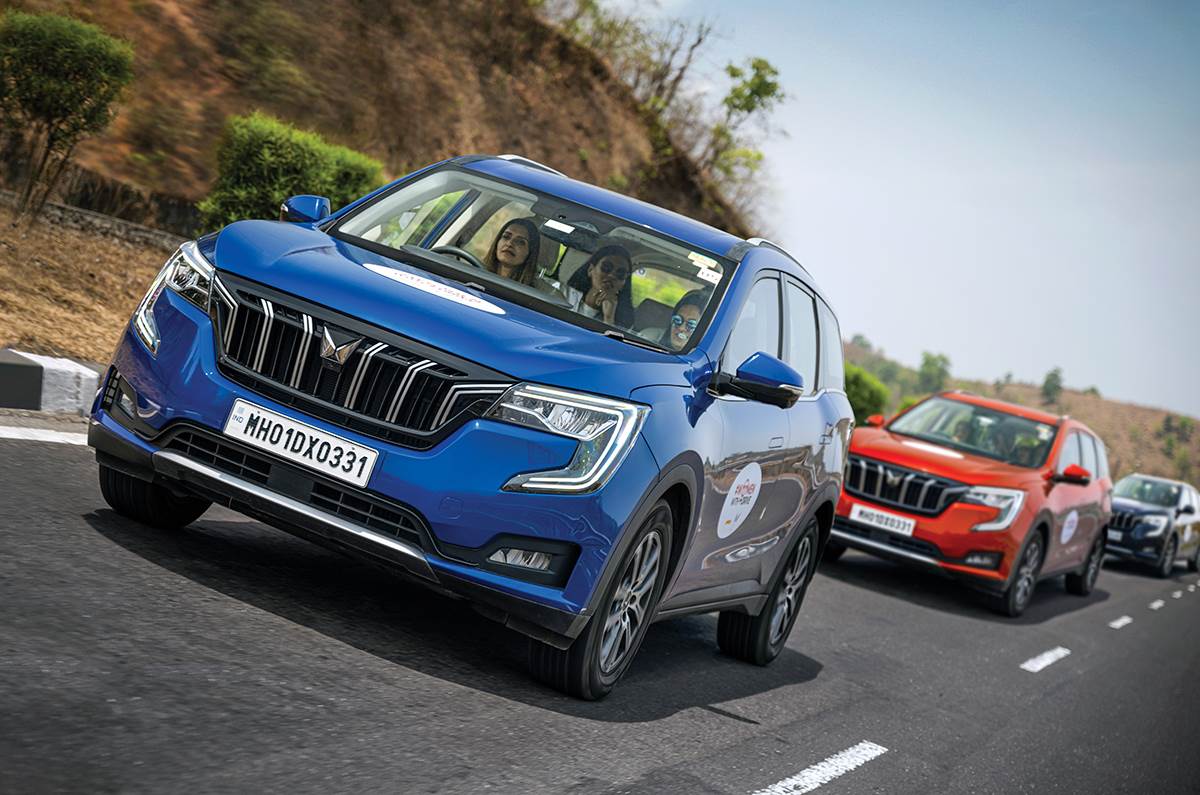 The XUV700s point their graceful noses towards the Mahindra Off-Road Training Academy at Igatpuri.

To most of the participants, who were experienced drivers, the XUV700 came across as an impressive package. “This is a huge car, but it shrinks around you when you are on the move. I loved the rear seat and the panoramic sunroof – and this is coming from a person who drives a large SUV herself,” said clinical psychologist Maherra Khambaty. Menswear stylist and SUV driver Niti Patel was especially impressed with the suite of features the XUV700 comes equipped with. “The Adaptive Cruise Control was the stand-out feature for me,” said Patel. Her friend and co-driver Anisha Ahuja, meanwhile, loved the XUV700 in its entirety. “I could probably tell you more about the XUV700 than a Mahindra employee. I have two dogs and often go on long drives with them. I also wish they had more space in my hatchback. The XUV700 seemed like a great car for both them and me, and now that I’ve driven it, I think I was pretty much right all along,” said the entrepreneur. 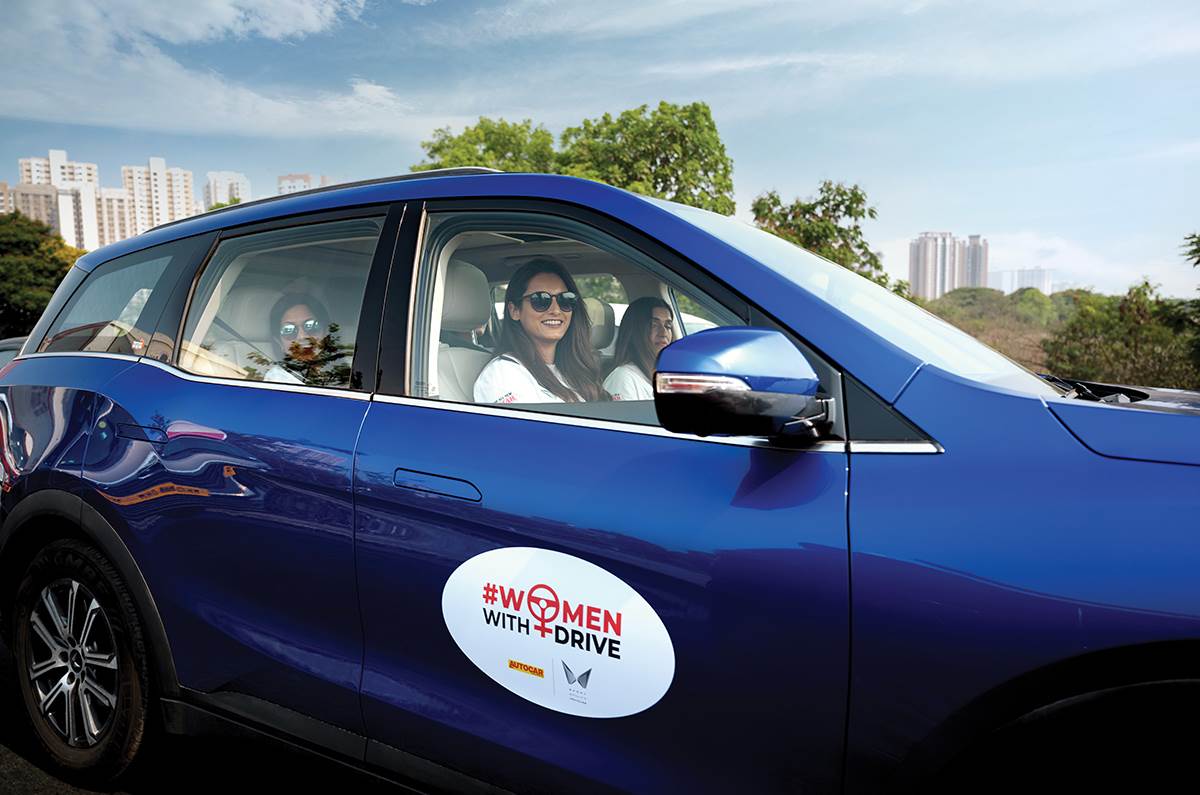 The fact that the XUV700 made an impression on the participants wasn’t surprising. The XUV700 is, after all, a cohesive blend of luxury, technology, and power. But Setia, who is seriously considering the XUV700, had an important point to make. “The fact that you don’t feel tired even after driving some 150km is true luxury,” she said, as the convoy entered the 28-acre Mahindra Off-Road Training Academy, which has trained over 2,000 drivers and is one of the finest of its kind in India. Mahindra Adventure crew familiarise the participants with the lay of the land at the Off-Road Training Academy in Igatpuri.

After a quick and light lunch, it was time to introduce the eager participants to some off-roading — the Mahindra Academy way. The girls warmed up with the taxi ride in the Mahindra XUV700 AWD, which included a hill climb, saw some fairly serious articulation, and it got the XUV700’s features, such as Hill Descent Control and rear-wheel anti-lock differential, to come into play. 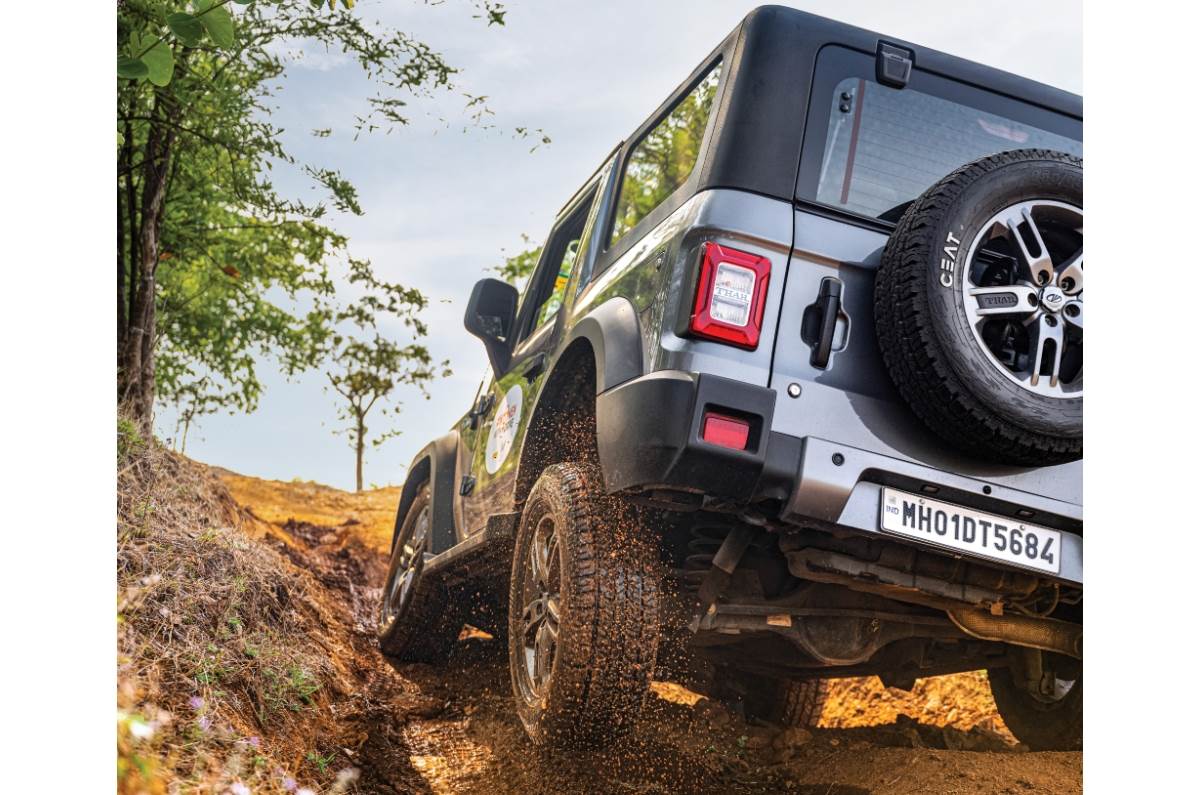 The women were introduced to concepts such as approach and departure angles, articulation, and more at the Academy.

Now that the participants had sufficiently warmed up, it was time for the Thars to make an entry. The specially created course for the Thar was divided into two sections and was a couple of notches higher on the difficulty index than the previous loop. It started out by giving the participants a feel of things. The Academy’s instructors and the Autocar crew helped them get a hang of how 4WD works, about differentials, driveshafts, and the transfer case, and the fundamentals of approach, departure and breakover angles. 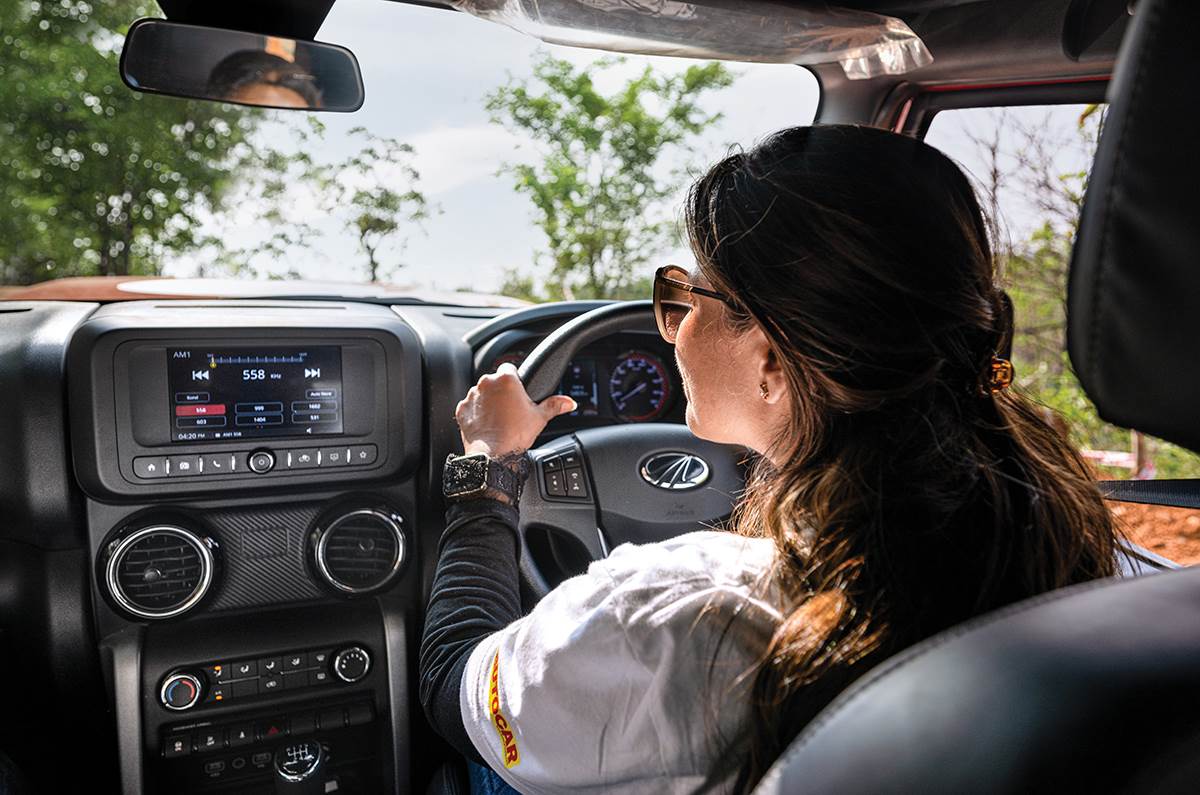 The Thar kept going even when the going got tough — and that resonated with several participants.

Lying in wait for the participants and their Thars were deep ditches that called for the Thar’s low-ratio to be engaged; ditches that tested articulation, and careful crawling over rocks and steep descents, which the participants negotiated, thanks to some expert guidance from the Academy crew. Each participant spent about half an hour at the wheel. Expletives flew all around; the adrenaline pumped, and, by the time the women emerged from their Thars, their faces were flush with pride at having taken on another challenge and vanquished it.

Branded Content: How to choose a car insurance cover with a very simple claim process