Mercedes-AMG has finally shown the spectacular, Formula 1-inspired One hypercar in production form, with customer deliveries planned to start later this year.

Announced by the Mercedes-AMG Project One concept at the 2017 Frankfurt motor show, the hardcore coupe is the most potent Mercedes-AMG road car yet, combining a modified version of the firm’s 1.6-litre, V6 turbocharged grand prix engine, with four electric motors for a combined output of 1062hp.

With a top speed limited to 350kph, it also becomes the brand’s fastest production car, eclipsing the 342kph-capable Mercedes-Benz CLK GTR from 24 years ago.

The two-seat hypercar is the result of a close collaboration between Mercedes-AMG’s regular road car operation and the UK-based Mercedes-AMG F1 team and AMG High Performance Powertrains division.

The car will be a model limited to 275 units, all of which are already accounted for at a price of £2.2m (over Rs 22 crore, before taxes and duties). The One was originally planned for 2019, but encountered a troubled gestation, chiefly due to the emission compliance of its high-tech powertrain and its F1-grade active aerodynamics.

The Aston Martin Valkyrie and Ferrari SF90 Stradale rival has a carbon fibre monocoque with an integrated steel roll bar. This supports a large rear sub-frame for the petrol-electric powertrain and a rear chassis made of carbon fibre and titanium.

The production version of the One largely holds true to the appearance of the original concept. The body, a combination of carbon fibre and composite plastic, has been developed to generate maximum downforce.

It features active elements within cooling ducts at the front, louvres on top of the front wheelhouses and a complex extendable two-piece rear wing. 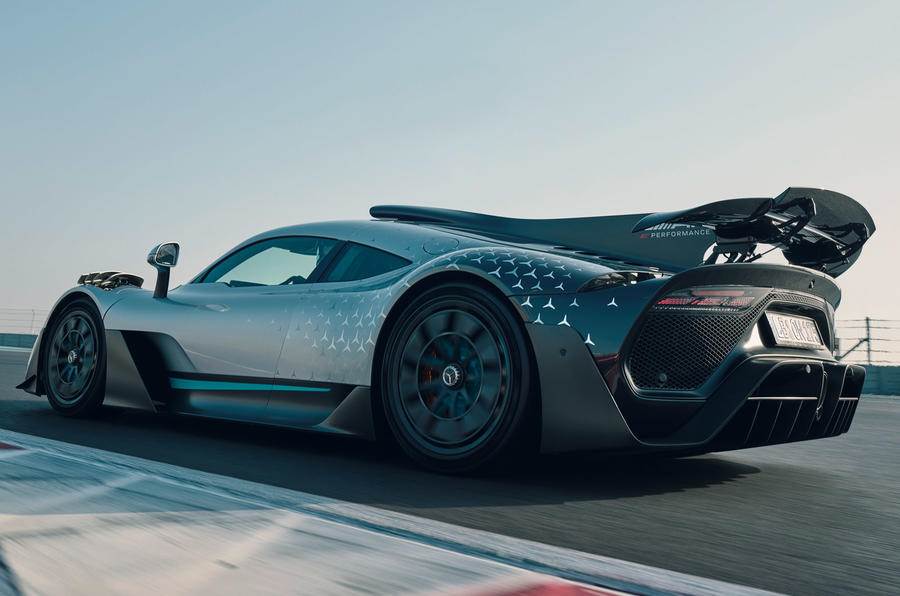 Cooling also plays a key role in the coupe’s appearance, with large ducts in the nose, an airbox that arcs over the cabin and sizeable extractors at the rear to draw hot air out of the engine bay.

The centre-locking 19-inch front wheels and 20-inch rear wheels are available in forged aluminium as standard, and forged magnesium as an option, and come shod with bespoke Michelin Pilot Sport Cup 2R M01 tyres. There are also carbon fibre elements to smoothen airflow and aid heat dissipation from the brakes and wheelhouses. 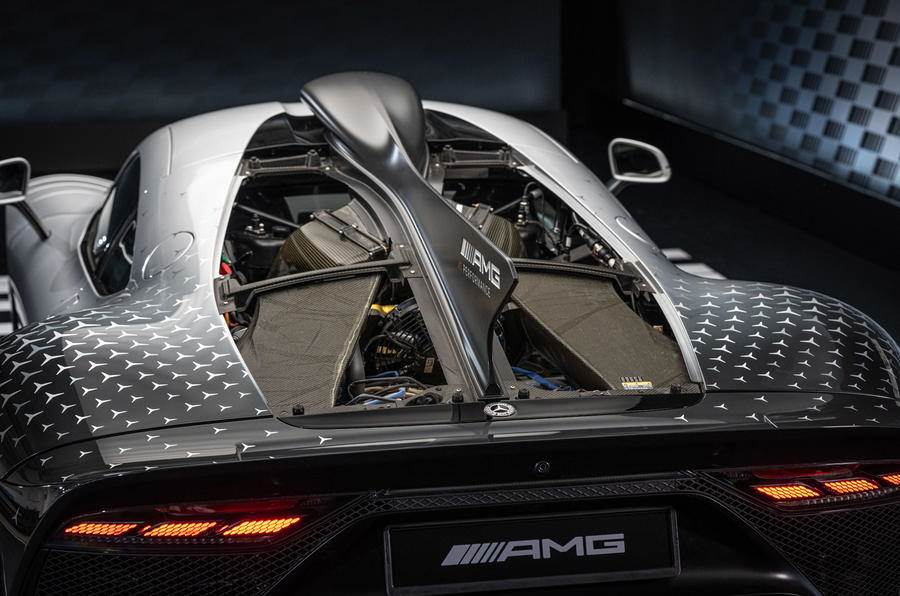 The longitudinally mounted V6 is a variant of the British-engineered F1 engine that has powered Mercedes to eight consecutive constructors’ titles. It develops peak power of 573hp at 9,000rpm, 2,000rpm shy of the redline.

To ensure that it satisfies all existing emission regulations, it receives electrically heatable catalysts and petrol particulate filters along with a titanium rear silencer.

The four electric motors include those used on more recent Mercedes-AMG grand prix cars. A 122hp motor is housed on a shaft between the turbocharger and the electric compressor, while a 163hp motor is positioned on the engine, connected to the driveshaft. The other two motors, making 163hp, are integrated in the front axle.

Overall power is 1,062hp – 333hp more than the previous most powerful AMG road car, the Mercedes-AMG GT Black Series. By comparison, the Valkyrie develops 1,175hp and the SF90 Stradale 999hp.

Mercedes-AMG does not quote a torque figure for the One, because “the complex nature of the drivetrain doesn’t allow a representative figure”. It does, however, claim the One can sprint from 0-100kph in 2.9sec, 0-200kph in 7.0sec and 0-300kph in 15.6sec. 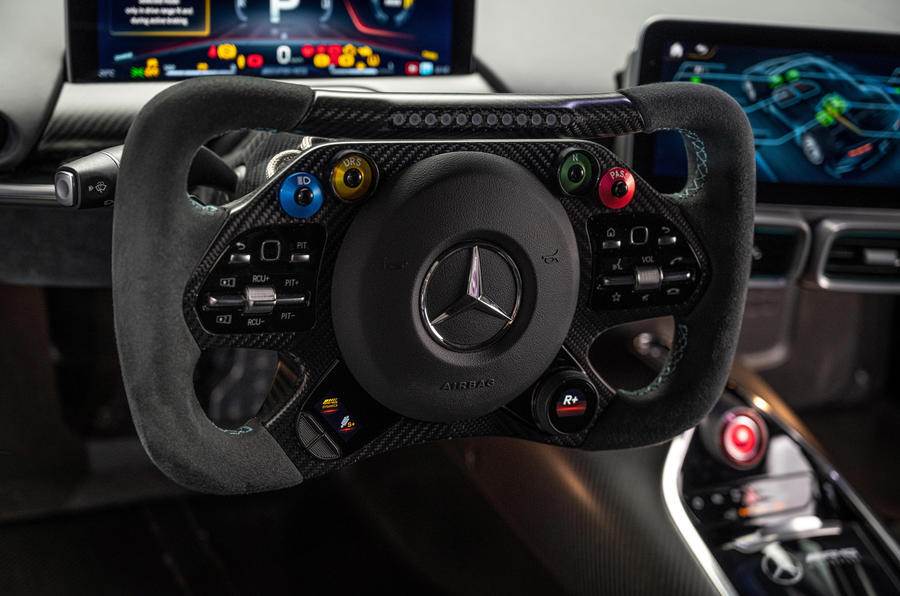 There are six driving modes – Race Safe, Race, EV, Individual, Race Plus and Strat 2, the last two reserved for track use.

Race Safe provides on demand hybrid properties from the powertrain. In Race, the engine is always engaged and is used to charge the battery. EV is a pure-electric mode.

Race Plus engages an active aerodynamic function that deploys the rear wing for added downforce, lowers the suspension and provides “special performance management” of the powertrain.

Strat 2 (derived from the Strategy 2 setting on Mercedes-AMG’s F1 cars) takes everything a step further, bringing even more extreme aerodynamic settings, a firmer suspension tune and full power from all sources.

On top of all this, there is a Charge button that enables the driver to supplement brake-energy recuperation with charging of the battery via the engine. An electronic traction control system, meanwhile, offers nine stages of engagement. 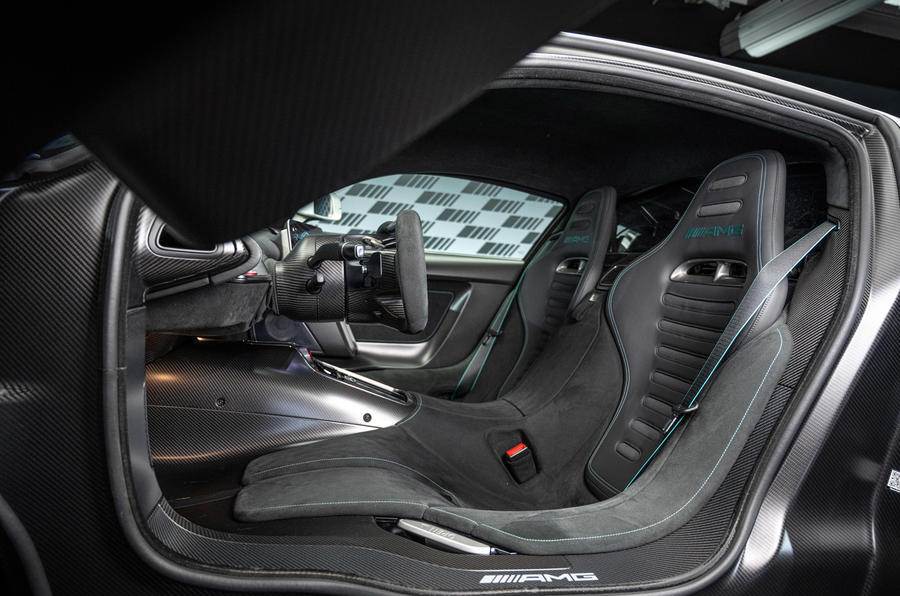 The One’s interior is trimmed in a combination of synthetic leather and carbon fibre. The thin, non-adjustable seat squabs are mounted directly to the floor of the monocoque, placing the driver and passenger as low as possible in an inclined position, their hips lower than their feet.

The airbag-equipped F1-style steering wheel has shift lights and rotary controls for the driving modes, traction control system and rear wing, while the pedal box also offers a good deal of adjustment. Two rectangular digital displays are mounted to the dashboard, one before the driver for the instruments and one in the centre for car data and infotainment functions.

What are your thoughts on the production ready Mercedes-AMG One? Let us know in the comments below.