Lobbyists have been pressuring the Biden administration to add more ethanol to the nation’s gasoline supply to cut gas prices. And while doing so has been a complicated and fraught decision for the administration, it appears those interests have won.

According to Reuters on Wednesday, citing sources briefed on the matter, the Biden administration has decided to retroactively expand the blending of ethanol into U.S. gasoline well above earlier proposed levels.

The decision would come just ahead of a rulemaking deadline of June 3—tomorrow—and it follows months of pressure from multiple agriculture interests. The Biofuels Caucus on March 31 made its pitch to the administration to increase supplies of E15 fuel—a blend of 15% ethanol and 85% gasoline—as a way to combat high gas prices resulting from the Russian invasion of Ukraine. At the time, the group claimed E15, which contains 5% more ethanol than the E10 mix that is the default at most gas stations, was typically selling for 20-30 cents less per gallon.

Around the same time, the Nebraska Ethanol Board published analysis claiming the conversion of 33% of all E10 fuel in the United States to E15 could potentially displace 100% of gasoline produced from Russian oil. 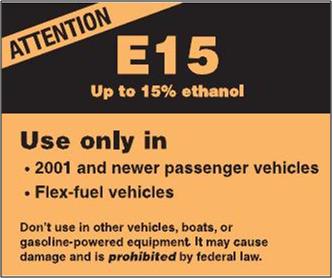 In the months since, the administration has tried to determine 2022 ethanol targets that balance greater use of biofuels without creating excess demand for its feedstocks, according to Transport Topics. The same crops used to make biofuels—including soybeans and corn—are also used for food and livestock feed.

The administration in April did announce an emergency waiver from the EPA making E15 available during the summer. Otherwise, E15 cannot be used in most of the country from June 1 to September 15. When available, E15 is sold at 2,300 gas stations nationwide, the administration said at the time.

The EPA issued the waiver as scheduled last month. President Trump issued a similar waiver in 2018, but rather than dealing with high gas prices brought on by a Russian invasion of Ukraine, the timing was largely aimed at giving Trump’s party a bump in the midterm elections.

Meanwhile, in an ad posted last week by the “Fueling American Jobs Coalition, interests argue that “with just the stroke of a pen President Biden can cut up to 30 cents off every gallon you pump.”

But all of this interest in E15 downplays the fact that the fuel has never been especially popular. E15 gasoline was approved back in 2012, but it’s been slow to catch on outside of some core corn-growing states.

Partly, there have been concerns that E15 may be damaging to some cars, creating worse smog in summer months, and that it may be worse for the climate than gasoline. Costly retrofits have also kept it from getting to many stations even after it’s allowed.