A detailed list of all the CNG-powered cars in India based on segments, price, and claimed fuel efficiency.

Surging fuel prices combined with small-capacity diesel options getting dropped gradually across multiple budget segments is contributing to CNG’s popularity in the country. CNG models command a premium over their petrol counterparts, but as a fuel, it is a cleaner and cheaper alternative to both petrol or diesel.

Maruti currently has six CNG-powered models across its portfolio, while its rivals Hyundai and Tata offer just two models each. As of June 2022, CNG prices stand at Rs 75.6 per kg in Delhi and Rs 76 per kg in Mumbai. Therefore, here’s a list of 11 CNG vehicles on sale today with their respective tank sizes, claimed range, and good/bad aspects. 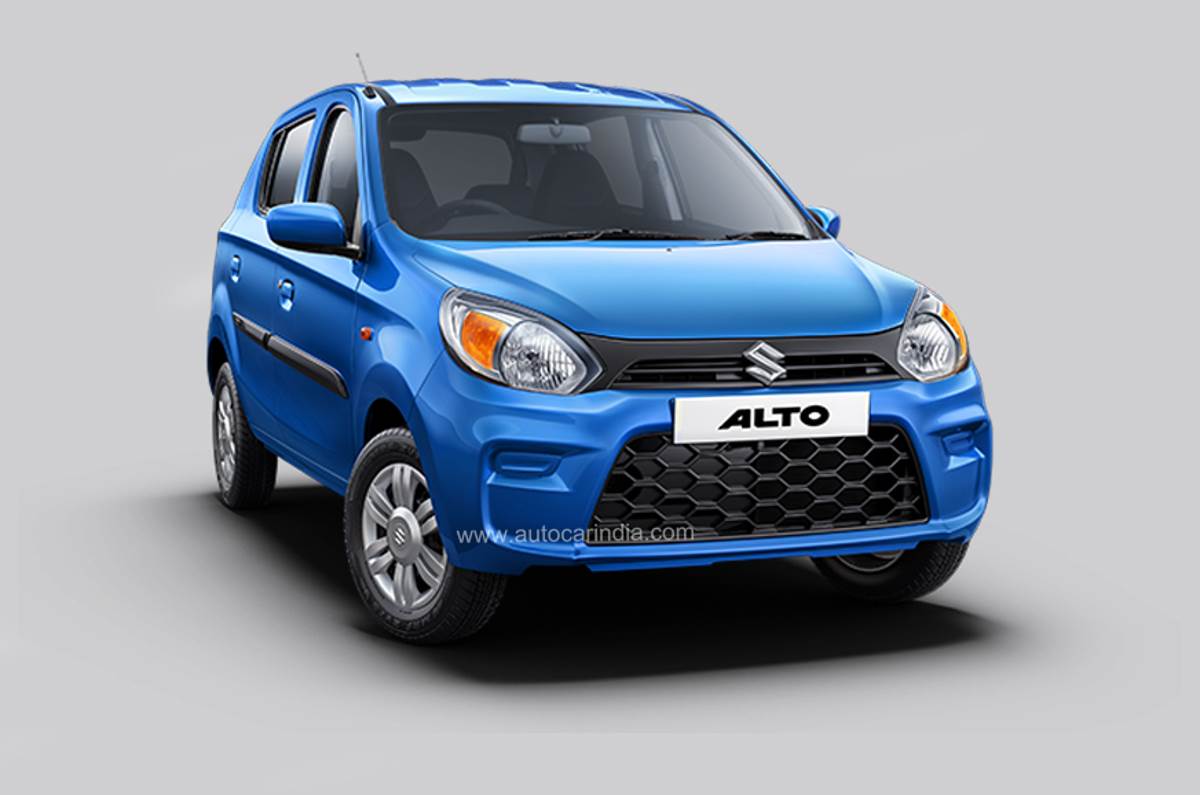 The Maruti Suzuki Alto CNG is offered in a single LXi(O) variant which gets safety features like dual airbags, reverse parking sensors and ABS with EBD. In terms of features, it gets dual-tone interiors and a 7-inch touchscreen display with Android Auto and Apple CarPlay functionality.

Priced at Rs 5.03 lakh, the Alto is the most affordable CNG hatchback on our roads today. With a 60-litre tank onboard, the Alto CNG’s claimed fuel economy figure is 31.59km/kg. The 796cc, three-cylinder engine produces 50hp and 60Nm, the latter of which is 9Nm lower than its petrol-powered counterpart. Therefore, it’s also the least powerful car among its rivals.

In our review of the Alto in 2019, we praised the hatchback’s updated safety tech that comply with crash safety norms, as well as its engine refinement. However, we also mentioned that it doesn’t have the roomiest cabin and misses out on some comfort features. 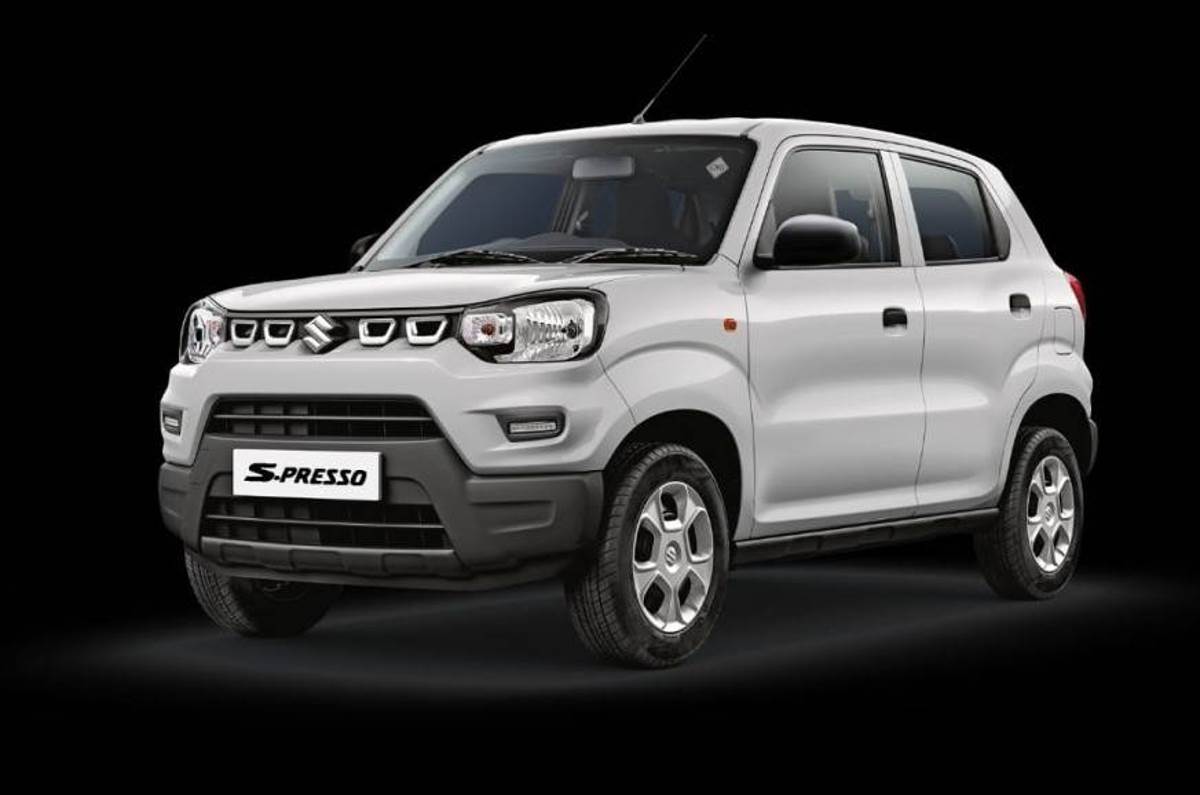 The S-Presso CNG comes with a 1.0-litre K10B engine that produces 58hp and 78Nm via a 5-speed manual gearbox. The WagonR CNG is also powered by the same powertrain, but offers a marginally better claimed efficiency.

Maruti Suzuki offers the CNG kit on the S-Presso across four variants – VXi(O), VXi, LXi(O), and LXi, with prices ranging from Rs 5.38 lakh-5.64 lakh. The S-Presso offers a claimed fuel economy figure of 31.2km/kg, with a 55-litre CNG tank onboard. In our review, we praised the S-Presso’s refined engine and spacious interiors, and we also noted its polarising oddball looks. 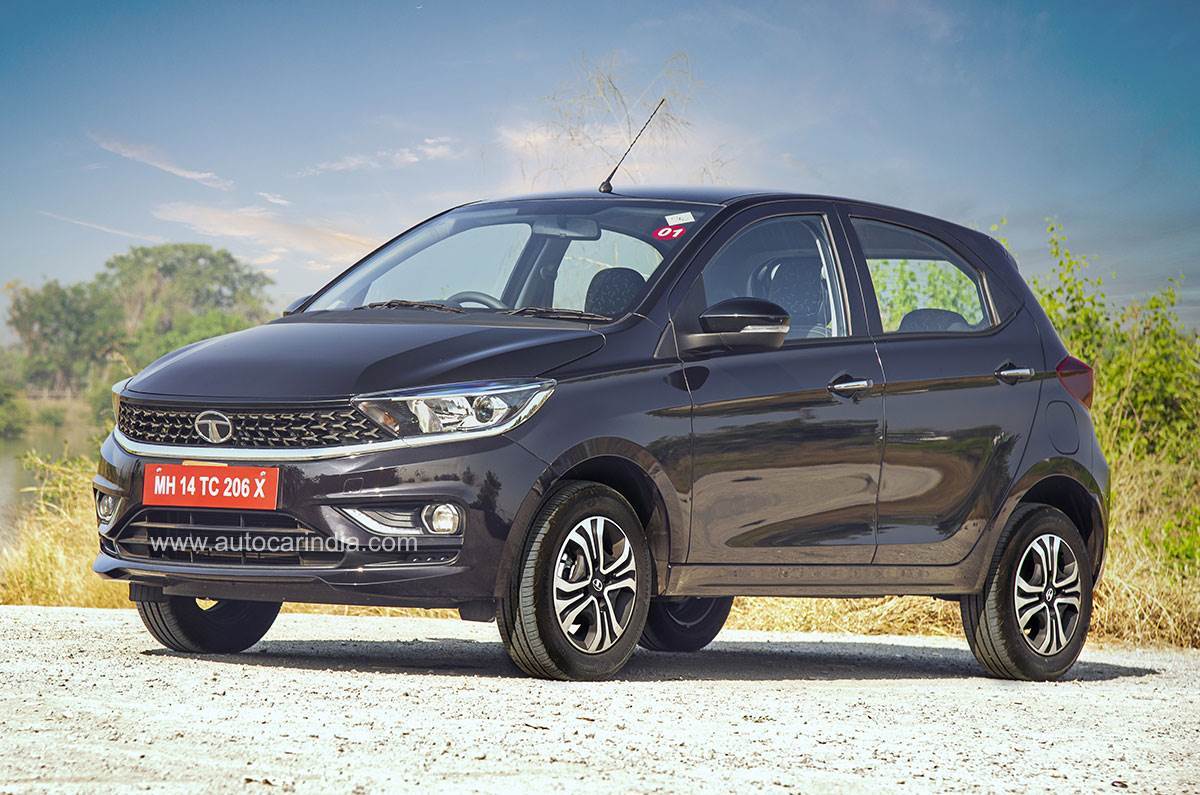 Launched in early 2022, the Tiago iCNG is the first product from Tata Motors’ line-up to get the CNG treatment. The hatchback continues with the same 1.2-litre, three-cylinder Revotron engine that produces 70hp and 95Nm in CNG mode, which is 13hp and 18Nm less than in petrol-only mode. This makes the Tata car the most powerful CNG hatchback in comparison.

The CNG kit on the Tiago is offered across four variants – XE, XM, XT, and XZ+, with the top-spec version costing Rs 7.79 lakh. We reviewed the Tiago iCNG back in January 2022 where we praised its Harman audio system, comfortable seats, feature-packed cabin and overall driving dynamics. However, even with a 60-litre onboard CNG tank, the hatchback offers a claimed fuel economy of just 26.49kg/km, which is the least amongst its competitors. 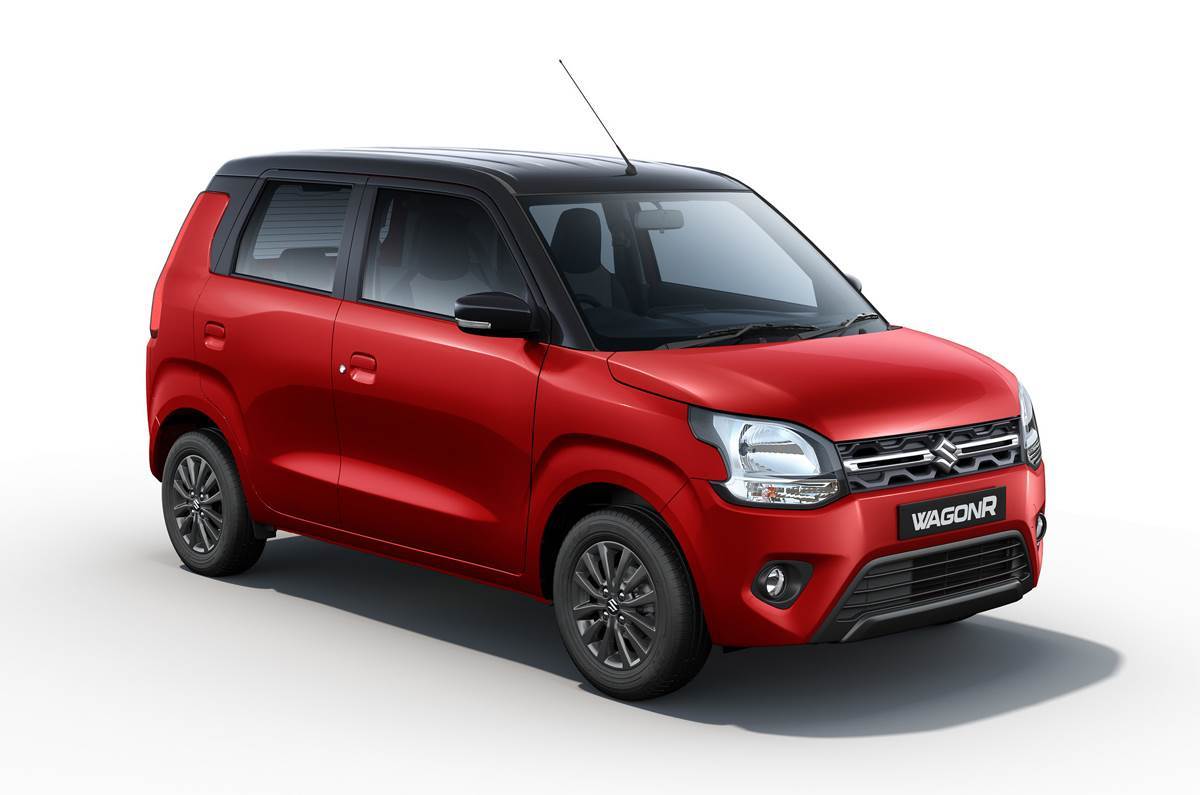 The Wagon R, which received an update in February 2022, is powered by the 1.0-litre DualJet engine in CNG format. Offered in two variants – VXi and LXi – the Wagon R produces 56hp and 82Nm in CNG mode and 64hp and 89Nm in petrol-only mode. As part of the update, the Wagon R also received idle start-stop tech for improved fuel efficiency and lower tailpipe emissions.

With an onboard 60-litre CNG tank, the hatchback offers a claimed mileage figure of 34.05km/kg. The Wagon R’s cabin and storage spaces are impressive, but we did not like the hatchback’s dashboard design and lift-type door handles. 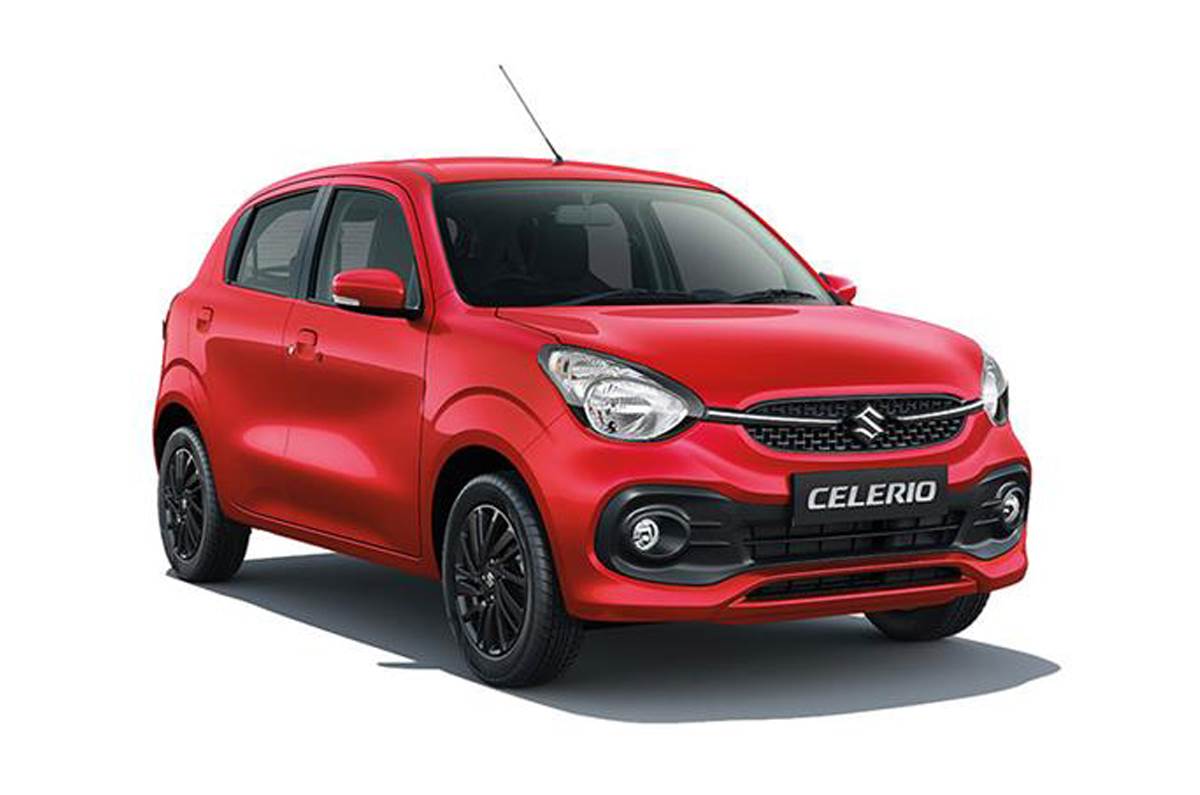 Maruti launched the CNG version of the Celerio at the start of this year. It is currently the most fuel efficient hatchback on the market. Offered in a single VXi variant, the Celerio CNG is powered by a 1.0-litre DualJet engine that’s mated to a sole 5-speed manual gearbox. Overall, the engine develops the same horsepower and torque figures as the Wagon R in CNG and petrol-only modes.

With a 60-litre CNG tank onboard, the hatchback has a claimed fuel economy figure of 35.6km/kg, the highest amongst its rivals. In our review in 2021 when the second-gen Celerio was launched, we found its revamped cabin and storage spaces to be pretty good. However, we did not like the hatchback’s lifeless steering and fixed rear headrests that may cause whiplash for taller passengers. 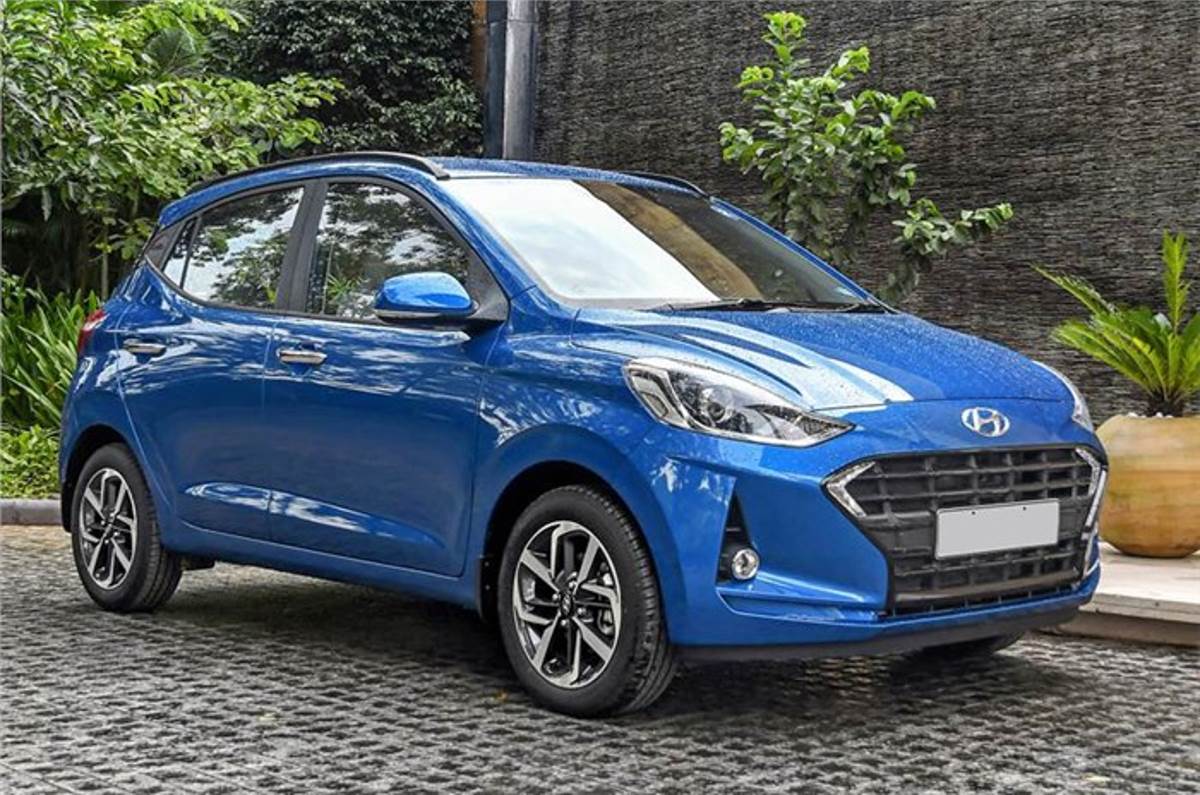 With Hyundai officially pulling the plug on the Santro hatchback, the Grand i10 Nios is the brand’s only budget hatchback on sale today. With a CNG kit that’s offered on Magna and Sportz variants, the Grand i10 Nios starts from Rs 7.16 lakh and goes upto Rs 7.69 lakh, making it the most expensive hatchback among rivals. The hatchback is powered by a 1.2-litre, four-cylinder engine that puts out 69hp and 95.2Nm in CNG mode, and 83hp with 113Nm in petrol-only mode.

But even with a 60-litre CNG tank onboard, the Grand i10 Nios offers a claimed mileage of 28.5km/kg, which is marginally better than the Tiago iCNG. In our review, we complimented the hatchback’s refined engine, cabin quality and features list, but found its steering lazy, driving dynamics and performance to be average. 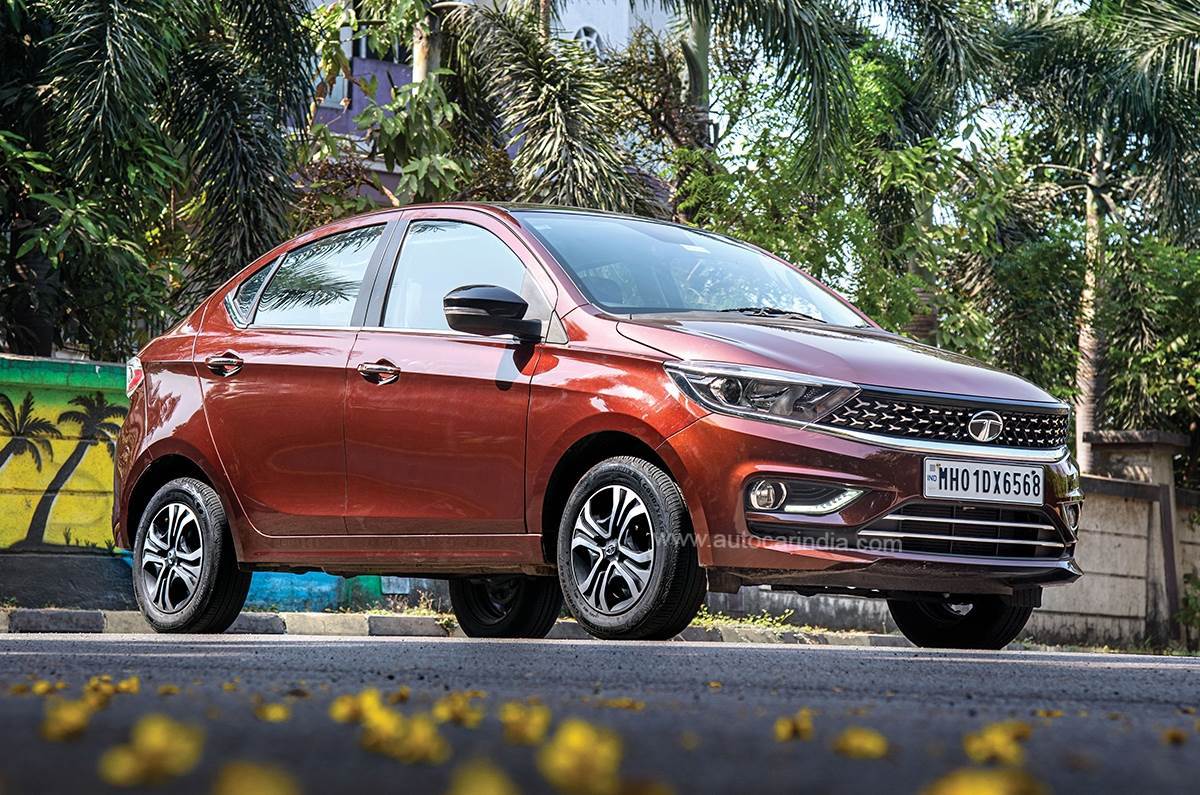 Launched along with the Tiago iCNG, the Tigor iCNG is the most affordable compact sedan in the market. Sharing the same powertrain as its Tiago sibling, it produces 70hp and 95Nm in CNG mode and 86hp with 113Nm in petrol-only mode. Tata offers the CNG kit on two top-spec trims – XZ and XZ+, which are priced at Rs 7.84 lakh and Rs 8.44 lakh, respectively.

And just like the Tiago iCNG, the Tigor iCNG too offers the least claimed fuel economy – 26.49km/kg. In our in-depth review, we appreciated the Tigor iCNG’s easy driving dynamics and Harman audio system. However, we did not like the petrol’s fuel efficiency, limited boot space and claimed range. You can also check out our real world fuel economy test of the Tigor iCNG by clicking here. 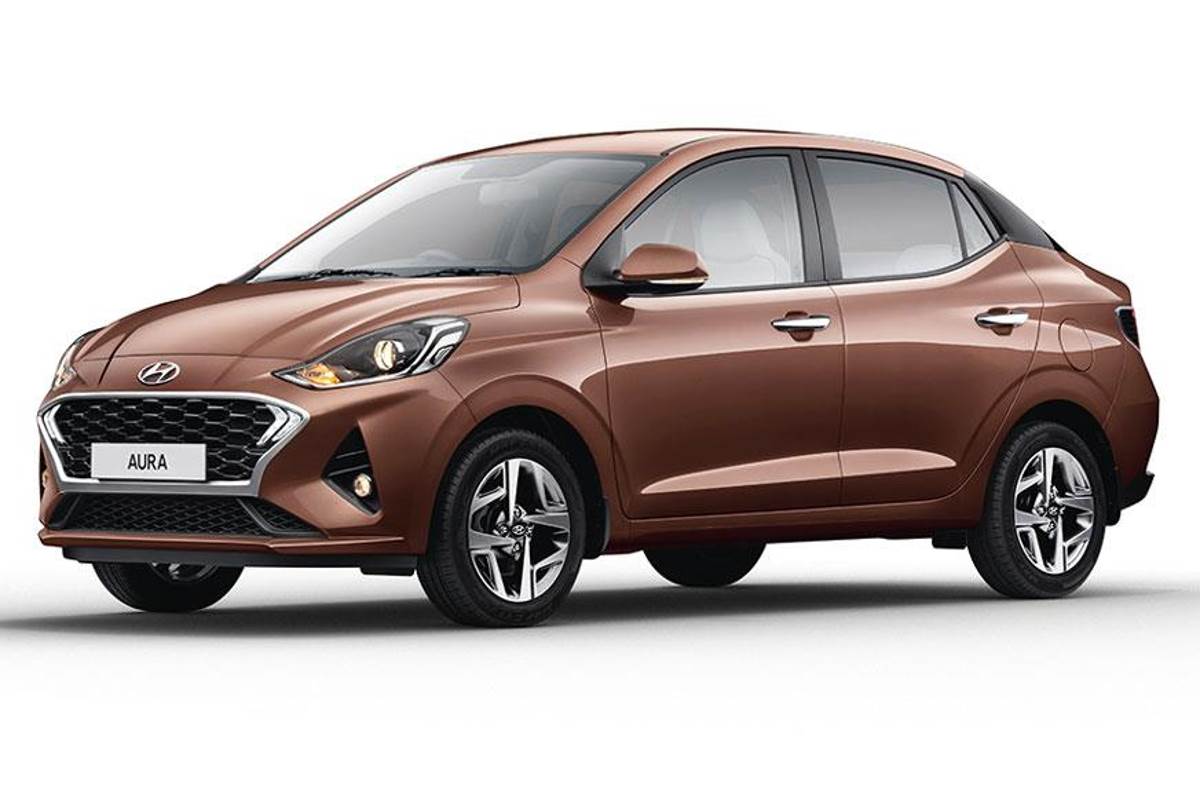 Similar to the Grand i10 Nios, the Aura has been on sale in India for more than two years now. During this period, Hyundai introduced the CNG version of the Aura which is offered in S and SX trims that cost Rs 7.87 lakh and Rs 8.56 lakh, respectively. It is powered by the same 1.2-litre, four-cylinder engine as its hatchback counterpart, producing 69hp and 95.2Nm in CNG mode and 83hp with 113Nm in petrol-only mode.

Compared to the Tigor iCNG, the Aura CNG offers a higher claimed mileage figure of 28.5km/kg from its 65-litre tank. During our test ride of the compact sedan, we liked its premium cabin layout with multiple convenience features. However, we found the Aura’s styling polarising. Plus, the lack of front adjustable headrests with excessive lumbar support on the seats may cause discomfort while driving for long hours. 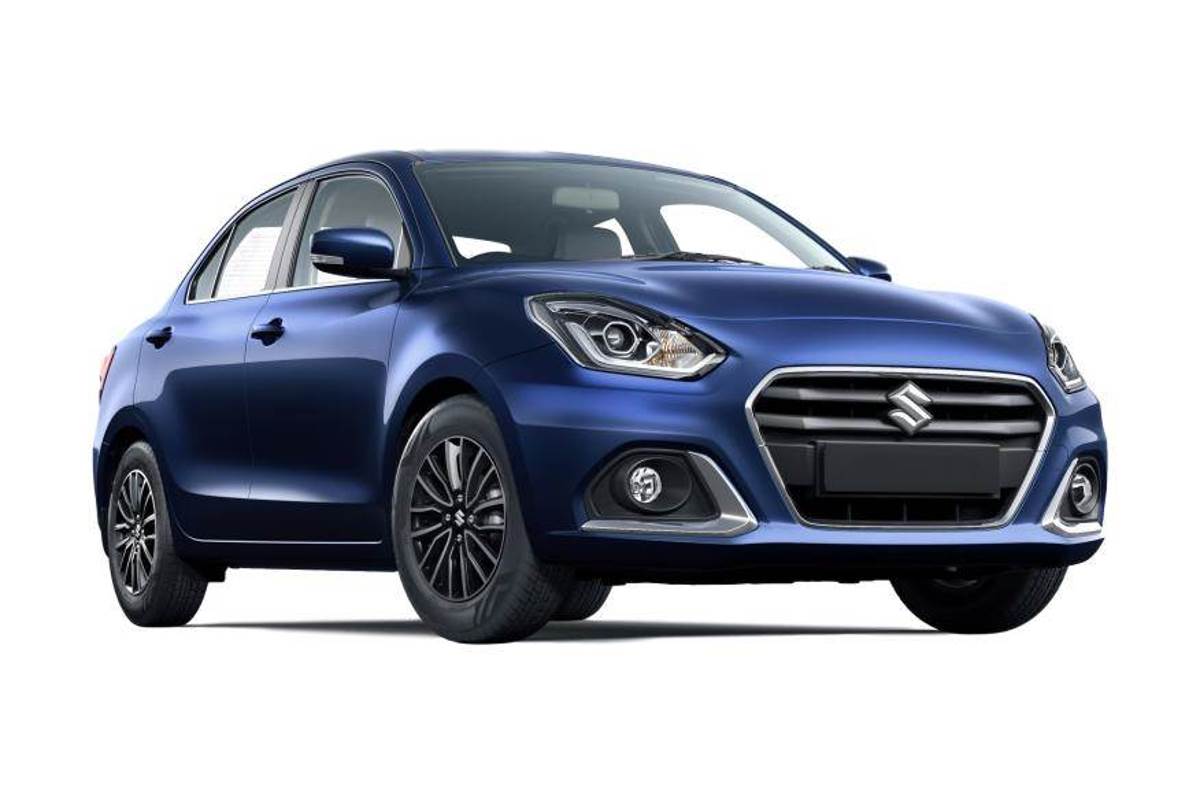 Maruti Suzuki recently launched the Dzire CNG, bringing its total line-up to six CNG cars across various segments. Priced at Rs 8.23 lakh for the VXi variant, going up to Rs 8.91 lakh for the ZXi variant, the Dzire CNG is the most expensive amongst its rivals. It is powered by a 1.2-litre, four-cylinder engine that produces 76hp and 98.5Nm, making it more powerful than the Aura CNG and Tigor iCNG.

The Dzire CNG also offers the best mileage figure of a claimed 31.12km/kg despite having a smaller 55-litre tank. Even though it’s the most expensive, the Dzire CNG offers the best space, comfort, performance and efficiency in comparison to its chief rivals. 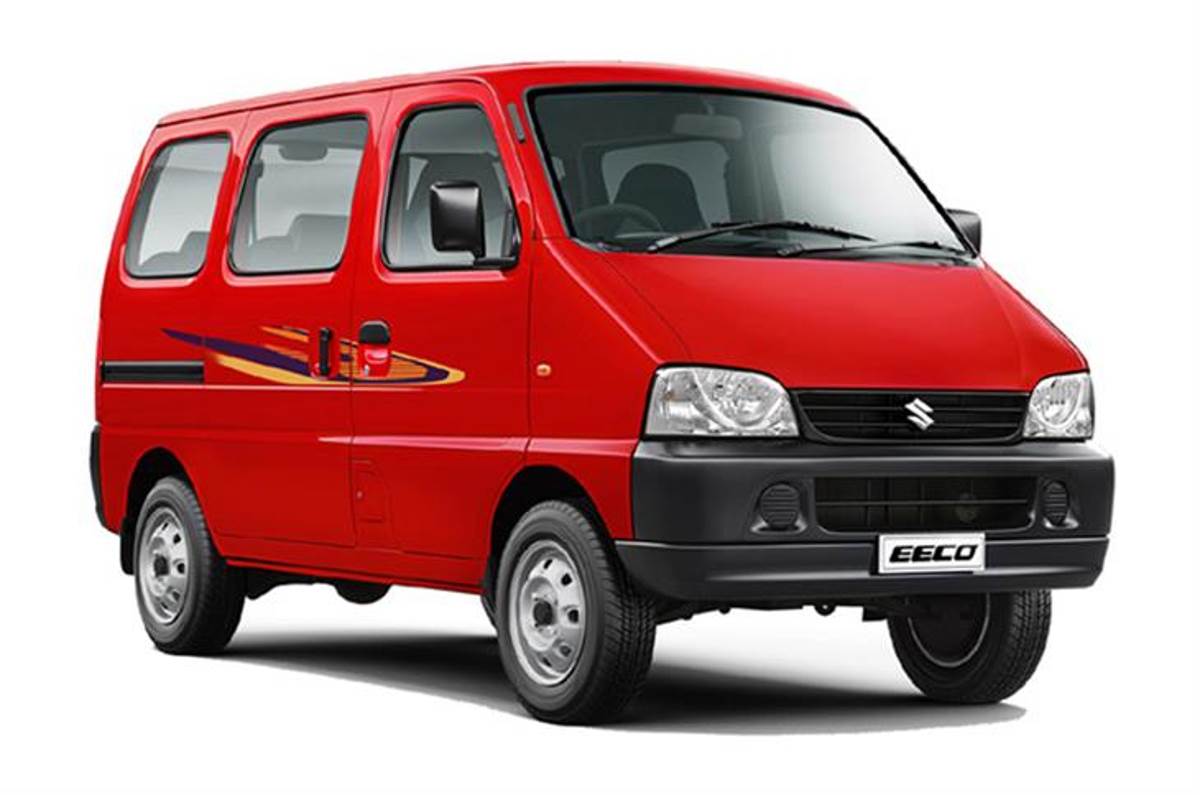 As the most affordable MPV in the market, the Eeco CNG is offered in a sole 5-seater format at a price tag of Rs 5.94 lakh. It’s powered by a 1.2-litre engine that produces 61hp and 85Nm in CNG mode and 72hp with 98Nm of torque in petrol-only mode. The Eeco offers a claimed fuel efficiency figure of 20.88km/kg from its 60-litre tank, which is significantly less than the much pricier Ertiga CNG.

Despite its affordability, the Eeco lacks premium features like a touchscreen display and sports barebone interiors. However, the MPV is now offered with updated safety tech like dual airbags, reverse parking sensors, and ABS with EBD. 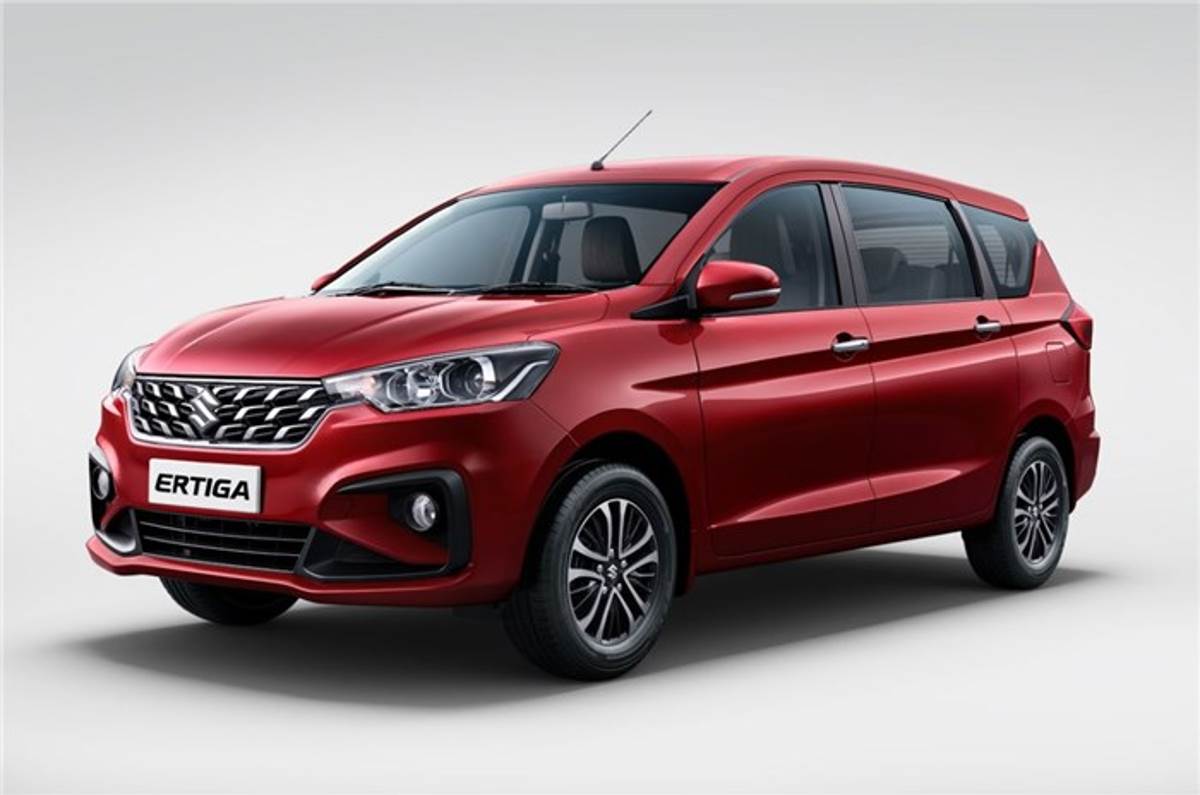 The most expensive CNG car on sale today, the Ertiga is offered in VXi and ZXi trims starting from Rs 10.44 lakh, going upto Rs 11.54 lakh. The recently updated 2022 Ertiga is powered by a 1.5-litre, K15C engine that’s mated to a sole 5-speed manual transmission. The MPV puts out 86hp and 121Nm in CNG mode and 99hp with 136Nm in petrol-only mode.

The Ertiga CNG has no immediate rivals in the segment, making it the only 7-seater MPV with feel-good features as seen on other Maruti vehicles. With a 60-litre tank onboard, the Ertiga CNG offers a claimed mileage figure of 26.11km/kg. Despite its expensive price tag, the Ertiga offers a plush ride with seat comfort and space. Click here to read our 2019 review of the pre-facelift version.