https://www.cartoq.com/next-generation-royal-enfield-bullet-350-spotted-testing-video/
We all know that Royal Enfield is currently working on a slew of new motorcycles. Along with new models, the Chennai-based two-wheeler manufacturer is also updating the existing models. Last year, they launched the all-new Classic 350 and this year, they will be launching the Bullet 350 in the market. It is different from the Royal Enfield Bullet which was available in the market till date. Royal Enfield has been testing the new Bullet 350 and it has been spotted testing several times and spy pictures and videos of the same are available online. Here we have another spy video of the upcoming Bullet 350 where the motorcycle is seen clearly in a quick walkaround video.

The video has been uploaded by Bullet Guru on their YouTube channel. In this video, vlogger talks about all the changes that are expected to be seen in the new Bullet 350 compared to the outgoing model. He mentions that one of his subscriber had shared the video with him. For many, Royal Enfield is not just a motorcycle but an emotion. The upcoming Royal Enfield Bullet 350 is based on the new J-Series platform. The overall design of the motorcycle remains the same. It still has that retro charm and gets modern day features.

The headlamp design of the motorcycle is still round with pilot lamps next to it. The instrument cluster has been updated and the tail lamp is similar to what we have seen on Meteor 350 motorcycle. Apart from the platform, the engine has also seen an update. The older UCE engine has been phased out  and it will get the new engine which we already saw on Royal Enfield Classic 350 and Meteor 350 motorcycle. It will be a 349-cc, single cylinder, fuel injected engine that generates 20.2 Bhp and 27 Nm of peak torque. There are even reports that Royal Enfield might slightly detune the engine in Bullet. The new engine is a huge change from what it came equipped with before. The new engine will make Bullet 350 a lot more refined and vibration free motorcycle. The new frame of the motorcycle would also help improving the handling and riding character of the motorcycle. 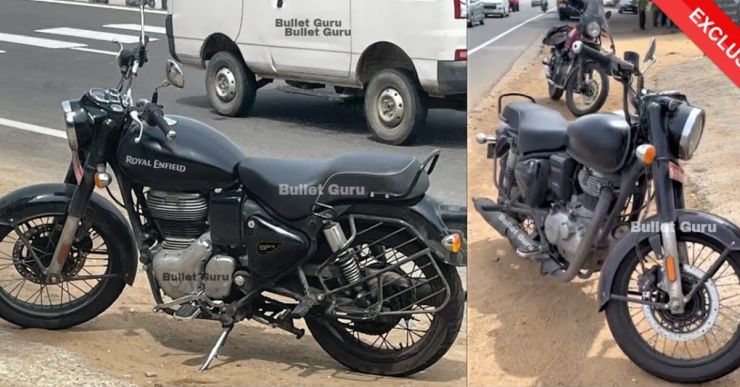 In terms of design, the motorcycle remains the same. It gets the tear drop shape  design for the tank with Royal Enfield branding on it. Just like the original Royal Enfield Bullet, the upcoming generation is expected to get pinstriping on the tank . It will give the motorcycle a different look and identity when compared to Classic 350. The seat on this motorcycle will be a wide single unit. The foot pegs are neutrally set to offer a comfortable riding position to the rider. The switch gears on upcoming Bullet is expected to be updated as well. It will get the rotary switch for headlamps and self start which we saw on Meteor 350 first. It will be offered with a single channel ABS.

Royal Enfield is vigorously testing Bullet 350 and several other motorcycles for India and international markets. Royal Enfield is expected to launch this motorcycle towards the end of 2022 or by early 2023. Price for the