https://www.cartoq.com/toyota-releases-new-tvc-for-all-new-urban-cruiser-hyryder-compact-suv/
Earlier this month, Toyota officially unveiled their first ever mid size SUV for Indian market – Urban Cruiser Hyryder. This is an all-new SUV which is developed jointly with Maruti. Pre-bookings for the Urban Cruiser Hyryder have already started at Toyota dealerships across India. The SUV will be manufactured by Toyota at their Bidadi plant in Karnataka. Toyota will be announcing the prices for the SUV sometime next month and the deliveries for the same will start in the following months. Now, Toyota has released an official TVC for the all-new Urban Cruiser Hyryder SUV.

The video has been shared by Toyota India on their YouTube channel. In this video, the Hyryder is compared to a person who is living a hybrid lifestyle. He is working like any other individual and is also following his passion at the same time. The Hyryder is also like the person in the video. The SUV gets a regular petrol engine and at the same it has a strong hybrid system which will offer an EV like experience to the driver. The owner does not have to recharge the batteries like EV. They charge automatically when the car is being driven in the petrol mode.

Toyota Urban Cruiser Hyryder exterior design of the is quite different from other SUVs in the segment. It gets some design elements that would remind you of Toyota SUVs that are sold abroad. It comes with twin LED DRLs, split headlamps with projector LED lights, muscular bumper, unique crystal acrylic front grille  with chrome garnish in it. Coming to the side profile, the SUV gets squared wheel arches and the overall design gives it an SUV look. The Hyryder gets 17 inch dual-tone alloy wheels which look good on it. 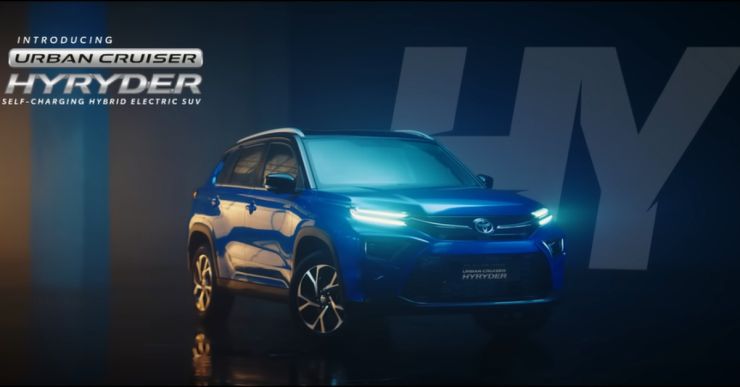 At the rear, the car gets split LED tail lamps and a chrome applique joins the tail lamp as well. The reverse lamp and turn indicators are placed on the bumper vertically. Moving in, the cabin looks premium in the Toyota Hyryder. There are soft touch material on the dashboard and the door pads. Some features that are offered with the SUV was shown in the TVC. The car gets freestanding touchscreen infotainment system, multi-function steering wheel, fully digital instrument cluster, HUD, 360 degree camera, dual-tone leather seat, ventilated seats at the front, automatic climate control, panoramic sunroof and so on. Overall, the car looks very premium on the inside. With all these features, Hyryder will compete with cars like Kia Seltos, Hyundai Creta, Volkswagen Taigun and Skoda Kushaq in the segment.

Toyota is offering Urban Cruise Hyryder with two petrol engine options. There is a strong hybrid version and a mild hybrid engine. The strong hybrid version of Hyrider uses a 1.5 litre TNGA Atkinson Cycle engine (92 Ps & 122 Nm). This engine is paired with an electric motor (79 Ps & 141 Nm ). The engine along with the electric motor generates combined power of 115 Ps. It is available with Toyota’s e-drive transmission. Next is the Neo drive engine which is basically the 1.5 litre K15C engine from Maruti Suzuki. It is mild hybrid engine and it comes with a 5-speed manual and a 6-speed automatic transmission.